Quests are a new type of card that was introduced with the release of the Journey to Un’Goro. Once they are in play, a certain number of cards that meet the quest's requirements must be played in order to receive the quest's generally “overpowered” reward card. Not all of the quests are easy to complete. For some quests players have struggled to find ways to incorporate them into decks that achieve consistently high winrates. To find out how these quest cards are performing, we decided to take a deep dive into the data and examine how the quest cards performed during the 7 day period from April 15th to April 22nd.

The Caverns Below (Rogue): 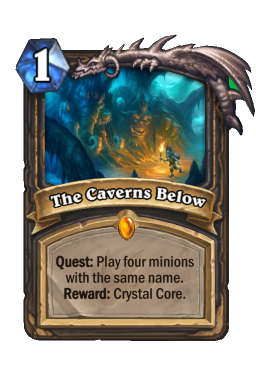 This is probably the most controversial card among the top tier quests. Many players hate it, or more specifically, hate losing against it. And understandably so. When the opposing rogue has good draws it can quickly become almost impossible to win.

The Caverns Below is at its best when completed as early as possible, winning about 66% of the time when completed before turn 6. If not completed by turn 7, winrates drastically drop below 50%.

This quest is also one of only two quests which perform well at Legend. It took a while for this card to find its footing, but it appears to have now stabilized above the 50% winrate mark at Legend one week after the release of the expansion.

One of the currently best performing quest decks runs two copies of Vanish. In addition to being useful for initially completing the quest, Vanish also synergizes with the 5 charge minions commonly run to provide a high amount of burst after the quest has been completed. For all Quest Rogue variants check out our deck page. 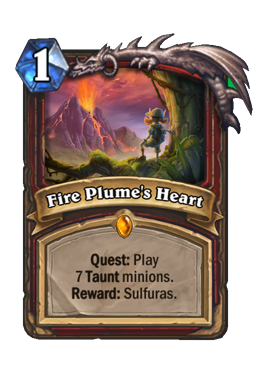 This is the second of the two current top tier quests of the expansion. Completing this quest has a throughout positive winrate of 55% or more, peaking at 63-65% between turns 9 and 11. Our new Quest Completion Statistics show that even at Legend this quest is getting completed almost 40% of the time by turn 11.

Fire Plume's Heart is very similar in winrate and popularity to The Caverns Below and also similarly stress inducing to play against once the quest is completed. The random high damage of the opponent's new hero power creates an extraordinary amount of pressure. If you can't quickly find lethal, then you better have a zoo of small minions on board to keep absorbing those 8 damage blasts.

One interesting side effect of replacing the warriors hero power is that they are no longer able to gain armor, which can make them vulnerable to burn decks like Freeze Mage. In order to work around that, one deck that has been recently rising in popularity runs two copies of Armorsmith and Shield Block to provide alternative sources of armor gain. For all Quest Warrior variants check out our deck page. 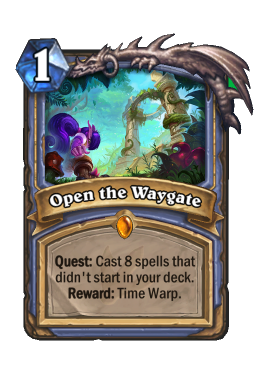 While this is the first of the mid to low tier quests in terms of winrate, it still sees a lot of play and offers a truly unique reward when it is completed.

Open the Waygate is most commonly played in the “Exodia” deck, which uses Sorcerer's Apprentice in combination with Molten Reflection and Archmage Antonidas to create an infinite chain of Fireballs. For all Quest Mage variants check out our deck page. To see infinite Fireballs in action, check out this incredible replay. 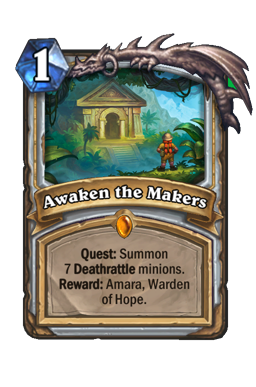 This was the first of the quests we got teased with during the Un’Goro card reveals. While this is just another mid tier quest in Standard, it actually performs quite well in Wild with the help of many powerful wild-only deathrattle cards such as Dark Cultist, Piloted Shredder, Sludge Belcher, the recently rotated Sylvanas Windrunner, as well as our old friend Dr. Boom. When combined with Reno Jackson, completing this quest really will lead you to the secret spring of eternal life.

Awaken the Makers is mostly completed between turns 7 and 11, resulting in similarly high winrates for both Standard and Wild: 65% after turn 9 and over 70% even later on. As usual, all the details can be found on the Quest Completion Statistics.

One of the more successful decks in Standard is running Lyra the Sunshard, Moat Lurker and Silence. Silencing the Moat Lurker while Lyra is on the board has double synergy as it both draws you a card and makes the Moat Lurker's destroyed minion permanent. For all Quest Priest variants check out our decks page. 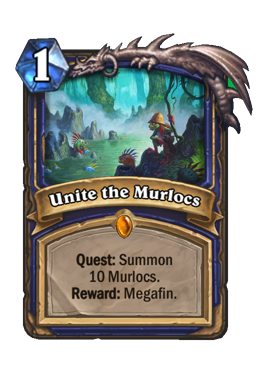 For being one of the less popular quests, this quest performs very well if you are not playing at Legend. To have the highest chance of winning with a Unite the Murlocs deck, you need to complete it before turn 9, which players succeed at about 35% of the time. After that, the winrates start looking grim. That does not mean you automatically lose on turn 9 but it gets a lot tougher. The Quest Completion Statistics reveal that by turn 11, the card's winrate is barely holding on above 35%. 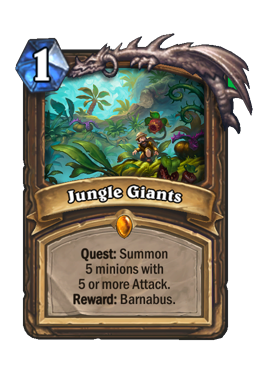 If you get this quest done before turn 8, then you are in pretty good shape with a 63% winrate (70% on turn 6), however, that only happens in about 10% of games. The Quest Completion Statistics show that after turn 9 things start going south.

One of the more successful decks in Standard runs Deathwing, Kun the Forgotten King and Genzo, the Shark for reload. For all Quest Druid variants check out our deck page.

Ragnaros the Firelord, Sylvanas Windrunner and Dr. Boom help this deck out in wild, but generally it doesn’t perform significantly better. 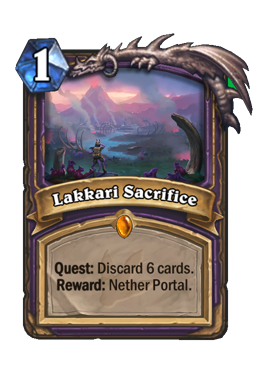 As a Discard Warlock enthusiast myself, I crafted this card day 1. Great. Idea. While having infinite imps spawning can be pretty cool when it works out, most of the time it just doesn’t. The Quest Completion statistics show that this quest only has a positive winrate if completed before turn 7, which happens in only 7% of games. It turns out that discarding 6 cards while trying not to die really is quite difficult!

If you nevertheless want to play this quest, try giving this deck with Devilsaur Egg and Ravenous Pterrordax a shot, and stay tuned to the quest's deck page to find out when intrepid adventurers figure out the secret to making it rain imps.

Lakkari Sacrifice does perform slightly better in wild. Perhaps that is due to the addition of Dark Bargain which can swing the board when the pressure starts getting out of control. 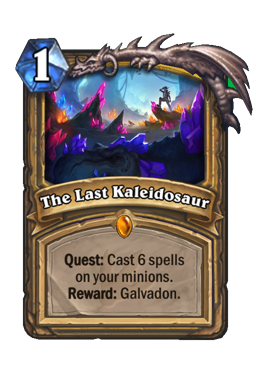 Let’s just say that Galvadon really is the most mythical creature in Un'Goro creator. You are not very likely to encounter this rare and elusive dinosaur in the current meta. The Quest Completion Statistics show that when it is played, The Last Kaleidosaur is only completed about 25% of the time. And even when the quest is completed, the winrate for the card remained below 50% no matter what turn it is completed by.

If you want to try and make this Quest work regardless, try using this deck as a starting point. It runs the The Voraxx and Spikeridged Steed combo. If you can pull it off, that's 12 / 28 in stats across 4 taunt bodies for 10 mana. For other Quest Paladin variants you can check out our deck page. 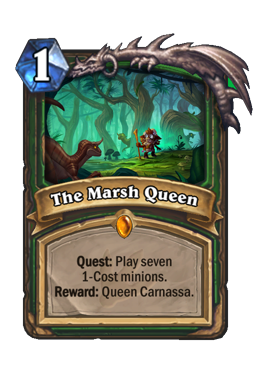 And finally, we come to what was one of the most controversial Quests before the release, and is now one of the two least played quests with the single worst winrate of the quest cards at Legend rank.

Completing it before turn 9 (which works out 38% of games) at least nets you a >40% winrate. Yup. That’s the most positive sounding data we've got for you. Let's hope that Queen Carnassas as well as Galvadon are not winning games because they're actually off with Ben Brode secretly plotting the card synergies in the next card set, so that they can begin their reign of terror right when we all get complacent and think we've got these quest mechanics well understood.

Most Quests, aside from the two top-tier ones, still have a reasonable winrate at 40% or higher. This does not make them the core of powerhouse decks, but it also does not make them unplayable either. It took almost two months after the release of Mean Streets for the meta to realize the full power of Finja, the Flying Star, so we still may have some more powerful quest decks just waiting to be discovered. If you enjoy the concept of a certain Quest, you will most likely be able to find a playable deck - even if you won’t necessarily be able to climb to legend with it.

Finally, most Quests also seem to be performing quite a bit better in Wild, so if you are having trouble finding a deck that works in Standard then give Wild a shot!

The year of the Kraken will undoubtedly be remembered as a year dominated by aggressive strategies. Cards like Tunnel Trogg, Flamewreathed Faceless, Flame Imp and Small-Time Buccaneer were all meta defining at one point or another, and consistently a common sight on ladder. In 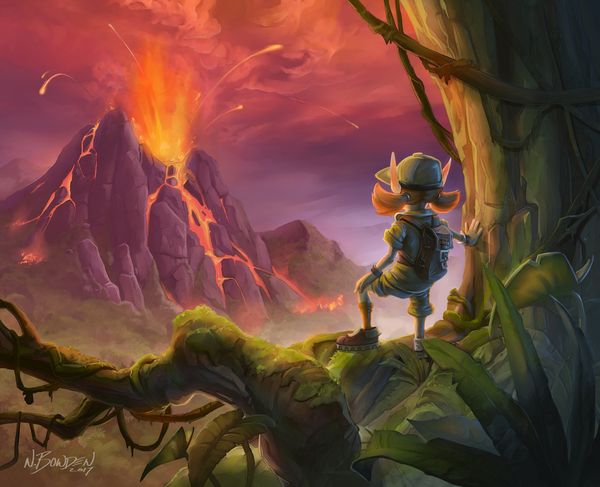 With the release of Un'Goro Hearthstone’s stale metagame has been alleviated of its stagnancy. The initial release week of Un'Goro has been the most fun I have personally had