In Patch 7.1 (February 2017) Blizzard introduced the ranked floors feature, which prevent players from de-leveling once they reach ranks 15, 10 and 5. In theory, this was intended to give players a chance to temporarily de-prioritize win-rate, take a break from the ladder grind and play something a little less serious.

On average, players should be less concerned about win-rate at ranked floors, and are therefore more likely to queue up with decks built around the cards they enjoy playing, as opposed to those they consider competitive. This leads to the tantalizing prospect of quantifying, with some objectivity, a "bad but fun rating" for each card.

Today, we compare inclusion rates of cards at ranked floors to those at grind ranks, with the intention of uncovering the cards and decks players play "just for fun", when ranking up doesn't matter. It should be noted that fun in Hearthstone is subjective, and no single metric can quantify it. Having said that, all the cards and decks presented have one common element: they have little to no competitive viability but still see play. Any card that induces that kind of behavior in the player base, must be doing something right.

What's immediately apparent in the list below is the sheer number of Warlock cards on the list. Warlock has been the big loser in the Journey to Un'Goro in terms of competitive viability, so it certainly makes sense players would gravitate to the class when win-rate doesn't matter. 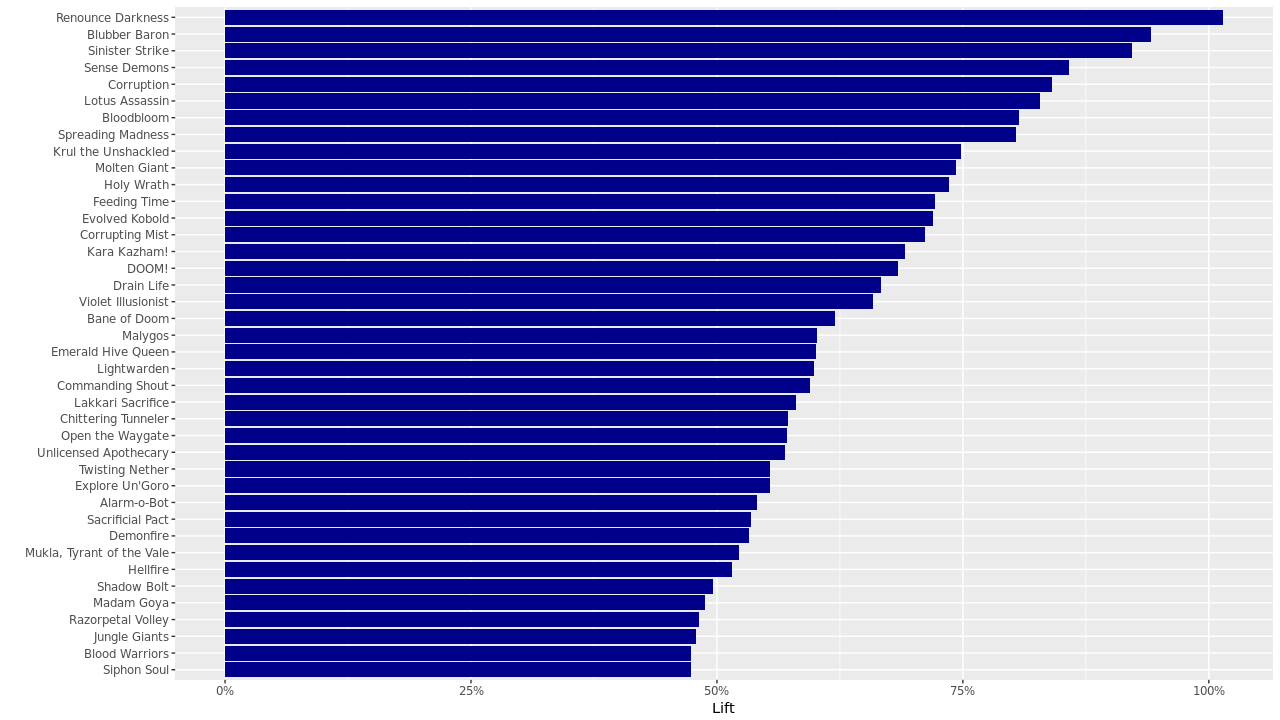 When looking down the list, the majority of cards are staples in a handful of popular decks. The following is a list of the top decks, based of figure 1, worth giving a try next time you reach a ranked floor:

Renounce Warlock is the undisputed king of the ranked floor, with at least 10 of the cards on the list being typical includes in the deck. The deck runs a whole bunch of bad spells that you're unlikely to ever see when rank matters. Another Warlock Archetype, demon-lock, has seen frequent experimentation throughout the life of the game, but unlike almost every other tribe, demons have never really had their time in the sun. Krul the Unshackled is the highest legendary on the list, its a card that players clearly want to work but with a deck inclusion win-rate of 37%, they haven't yet.

Lakkari sacrifice has seen quite the evolution since its release. At first, it was used in faster discard zoo-lock style decks but has since found play in slower hand-lock style deck, despite never being strong competitively. On the other hand, Waygate Mage is a deck which has seen some competitive play and really straddles the line between meme deck and competitively viable. Having said that, the win-rate of this archetype is consistently below 50%. What's pretty much universally accepted is the despite its competitive short comings, its a very unique deck and a lot of fun to play.

A blast from the past, Malygos Miracle Rogue, see play also at ranked floors, despite its abysmal win-rate (42%). Razor-petal Volley compliments the classic Sinister Strike for that heavy Malygos burn turn should you make it to the late game. Moonfire also makes the list, suggesting Malygos based Druid builds are still also fairly popular with players. Lotus Assassins popularity suggests players are trying out the stealth rogue archetype, which is actually one of the few archetypes on this list with a positive win-rate.

Holy Wrath Paladin shenanigans are as old as hearthstone itself, but with the the "nerf" to Molten Giant and release of Hemet, Jungle Hunter, players were provided a way to improve the consistency and potency of the decks win-condition. You are unlikely to find a more all in deck than this one, with games often coming down to a roll of the dice. Good stuff.

On a more serious note, what's apparent from the data is that players love playing combo decks, despite the fact they are mostly not very good anymore. Renounce Warlock (Barnes/Y'shaarj), Malygos Miracle Rogue, Holy Wrath Paladin, Demon-lock (Krul/Demons in hand) and Waygate Mage all involve some form of set-up with some significant swing in late game. Blizzard has fairly consistently nerfed cards which are strong in combo-style decks, but players seem to be voting with their feet and playing them anyway.

On the other hand, would you really want to see a Holy-Wrath Paladin meta, where tilting 25 damage pure luck combos were the norm? Or a meta where you got stomped regularly by Renounce RNG? Where combo decks fit in the meta is a topic for hot debate, but what's great is that the ranked floors have helped combo carve out a small niche in the rank 15, 10, 5 and Legend micro-meta.

The below figure shows the Top 40 "most fun" legendaries. These are the legendaries players are most likely to play with when just trying to have fun. Keep that in mind next time you read a 'safe legendary disenchant' guide, especially with the coming changes to pack duplicates. 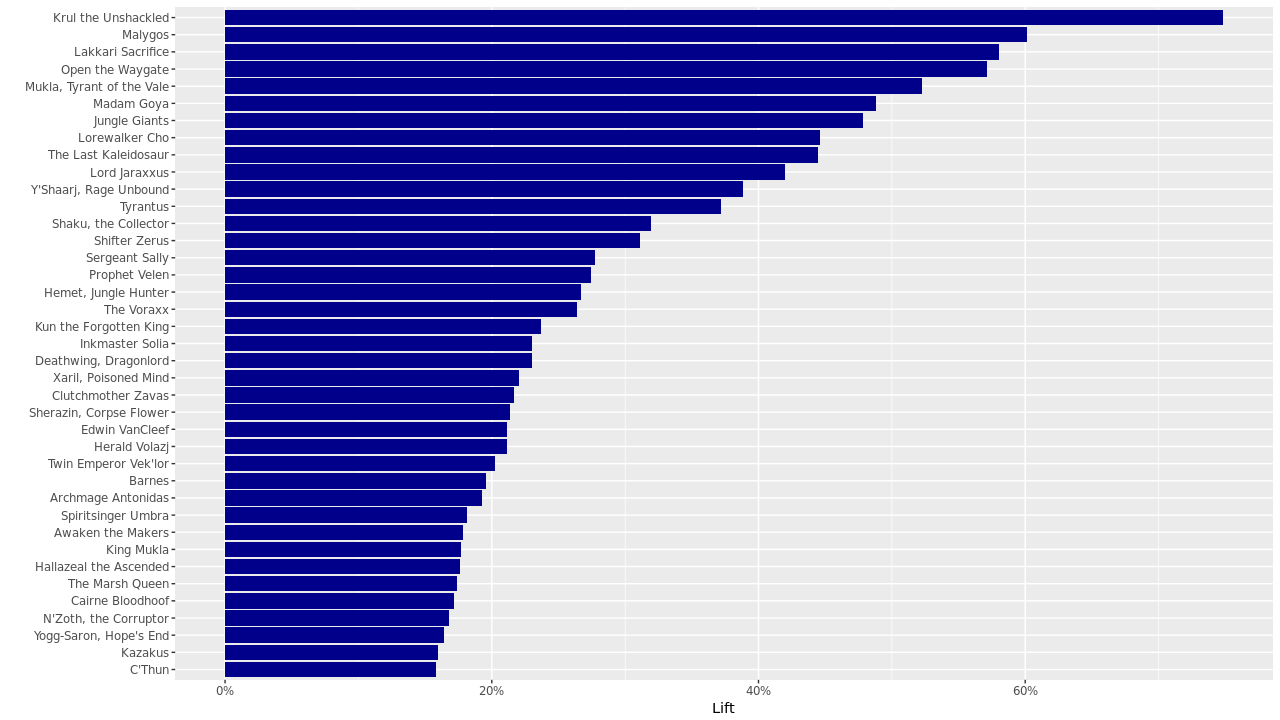 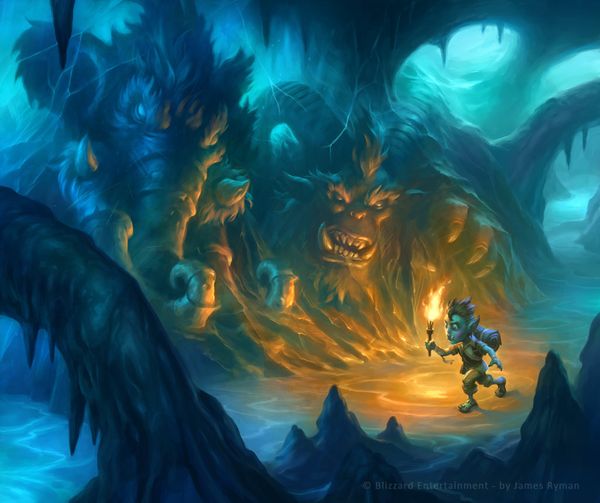 The Caverns Below has been the most controversial quest from the Journey to Un’Goro expansion. On July 10, Blizzard responded to the demands of the players and announced that 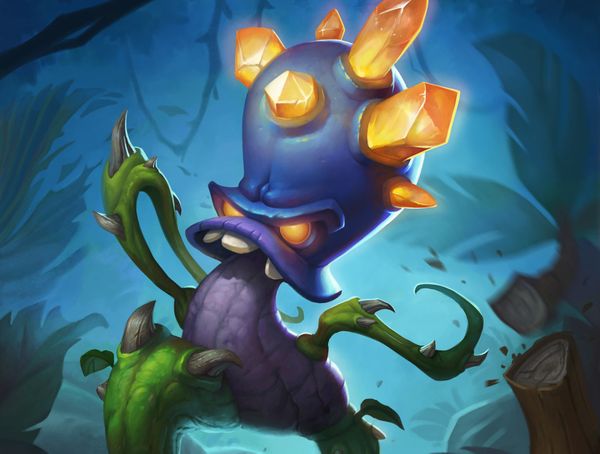 Curious Glimmerroot is one of the most unique cards in the Journey to Un'Goro expansion. With it comes a completely new mechanic; a mini-game of sorts, that has the player