Curious Glimmerroot is one of the most unique cards in the Journey to Un'Goro expansion. With it comes a completely new mechanic; a mini-game of sorts, that has the player guess something about their opponent's deck.

With such uniqueness comes unique opportunities to dive into the fun statistics surrounding it. So without further ado, let's now take a look at the card's battlecry.

A different test of skill

Have you ever wondered how often people get it right? Well the short answer is 81% of the time!

The long answer is a little more interesting. Curious Glimmerroot is a card that rewards a players knowledge of the overall meta-game, however you can circumvent all of that by just waiting to see what's in your opponent's deck. In theory, we should see a correlation between the turn the card was played, the skill (rank) of the player and the chance they chance they will chose correctly.

The trend of success with turn is different across the different rank buckets. Rank 15-20 players are almost 10% more likely to pick correctly by turn-10 compared to turn-2, whereas a rank 5-10 or legend player really doesn't see any improvement. Of course, whether this effect is a result of a lack-of knowledge of the meta-game, or the wider deck diversity at lower rank (as players might not have as complete collections) is up for debate.

With this in mind, we can begin to explain the dips in success rate at ranks 5, 10 and 15. As players here should be of a fairly consistent skill-level, this effect can be attributed the much wider diversity in deck composition at these ranks. Players are more likely to be taking a break from the ladder grind here as their rank is safe, and playing 'fun' decks (in-fact, Glimmerroot itself is most often played at these ranks), which are less familiar to the wider player population and therefore harder to pick.

There is daylight between the probabilities of success across the different rank buckets when the card is played in the early game. Many argue that Hearthstone laddering is a pure numbers game, with rank merely being a measure of how many games you could squeeze into a season. Figure 1 directly contradicts that notion, and provides a concrete example of how players of better rank are measurably more knowledgeable about the overall meta-game. Turn-2 or 3 Glimmerroot success, a proxy for a players overall knoweledge of the meta, does indeed differentiate a good rank 5 player from a legend player.

But what about other modes? Wild lets you play with every card ever printed, leading to a much wider range of potential options. And in arena, deck uniqueness is much greater due to the draft's randomness! What chance do you have to pick correctly? 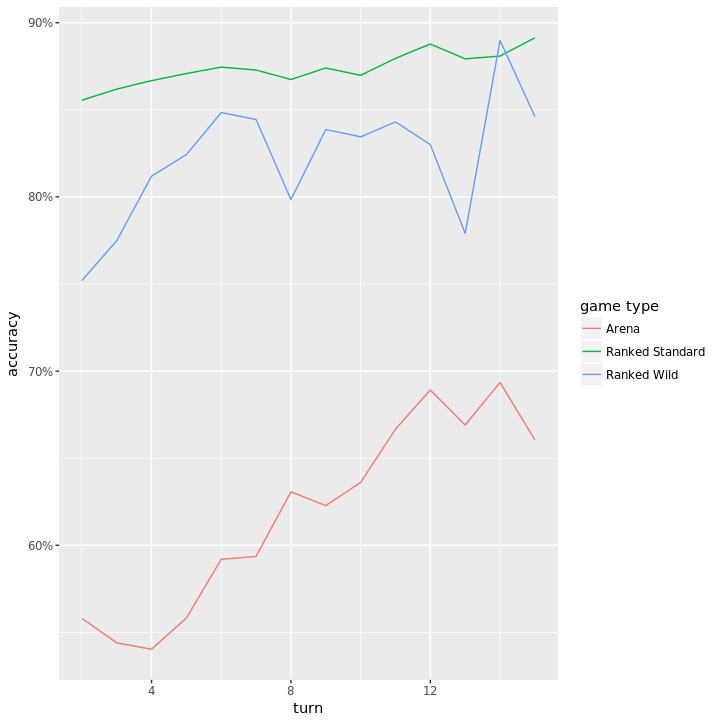 Wild appears to be have around a 5% penalty over ranked, however the player base is quite different. Anecdotally, Wild is played less competitively by many and it's certainly far less popular (10:1 Standard vs. Wild games recorded) which may contribute to this poorer performance.

Arena is a different story, and your chance of picking correctly before turn 5 is pretty terrible (remember, pure chance is 33%). So in theory you should wait if you want to win the value game, however Arena has been tempo oriented for a long time now. Waiting is generally not a good idea in arena. Hearth-Arena rates the card as "above average" in the class, whereas guaranteed card generation tools like Kabal Courier, Stonehill Defender and Crystalline Oracle are classed as "Good", perhaps for this reason.

Some cards are harder to pick than others, for example if you a see a quest you can be fairly sure if it started in your opponent's deck given they either played it or didn't on turn-1. On the other hand, some are much harder, particularly those that see fringe play. So what cards are being shown and fooling players most frequently? 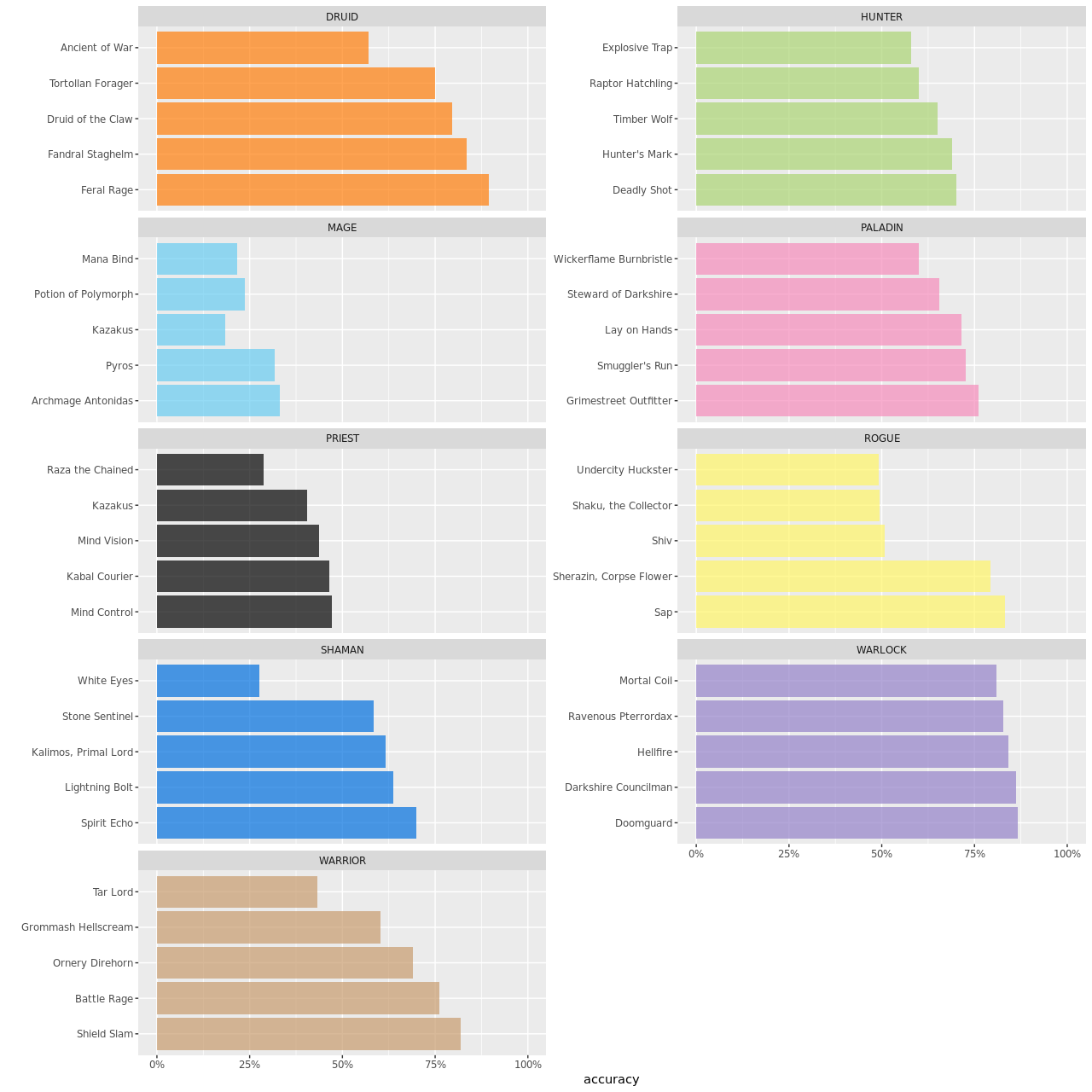 For whatever reason, Mage and Priest have plenty of cards that are wrong more than 50% of the time they are picked. They both share Kazakus as a common trap card, and Priest's worst offender is another 'Reno' deck style card, Raza the Chained. It's probably safe to say some people haven't quite caught up with the Year of the Mammoth meta if they're picking cards like these. In Mage, the two secrets shown see some play but appear to be the wrong choice most of the time they are shown, as are the Legendaries Pyros and Archmage Antonidas.

In fact, many of these cards are legendaries (13/45). For example, Rogue's 3 of the top 5 worst offenders are legendaries, as is Shaman's most frequently incorrectly picked card, White Eyes. Wickerflame Burnbristle, Fandral Staghelm, Grommash Hellscream and Kalimos, Primal Lord also make the list. Perhaps players are willing to gamble for such high impact cards, maybe their cost prohibits some players playing them in decks they typically would slot it in too, or perhaps new players are just dazzled by them, and forget they're not just discovering a card! 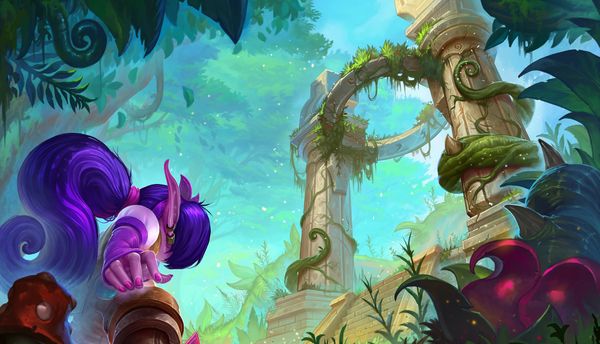 In Patch 7.1 (February 2017) Blizzard introduced the ranked floors feature, which prevent players from de-leveling once they reach ranks 15, 10 and 5. In theory, this was intended

This last month was a big one for HearthSim: We launched HSReplay.net Statistics and have been hard at work every day since. We're incredibly grateful for all your feedback and all our Premium subscribers! Thanks to your support we're able to continue working