Whizbang the Wonderful was a card hyped since its unveiling, being heralded as the champion of free-to-play and the ultimate challenge for streamers throughout the community. In short, Whizbang lets players play with one of the eighteen deck recipes, selected at random, allowing players with sparse collections to get a taste of the new content.

Many have pledged to reach legend using the card, but just how hard a challenge will that be? And on the flip side, are Whizbang decks actually better than your typical rank 25 deck, making the card a viable ranking strategy for new players?

The following show the winrate of the Whizbang decks by deck in Ranked Standard. Each of the decks has been assigned an archetype that best describes it. For a full list of decks, see for example here or here. Note that data is taken from August 12-14 as determining deck id at the start of the game requires custom logging which was not available at launch. 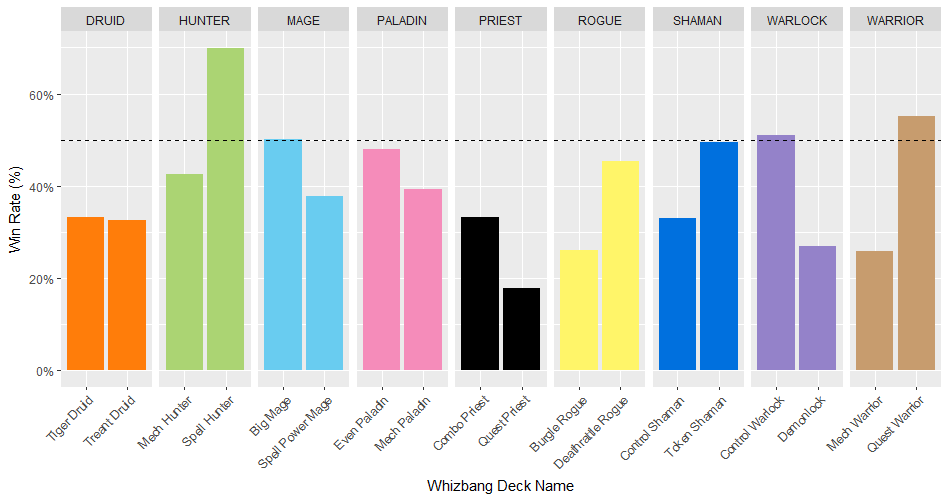 It's immediately apparent that Blizzard hit the nail on the head with the Spell Hunter deck with its 70% winrate. Spell Hunter is classified as a tier 1 deck at the time of writing, and given much of the Whizbang play is at lower ranks, it's not surprising that it sees such high winrates.

The good news ends here though.

Behind Spell Hunter sit a handful of decks that see winrates between 50% and 55%. Previously existing archetypes with little modification, including Quest Warrior, Control Warlock and Big Mage at least break even in terms of winrate but lag behind top meta decks that better utilize cards from The Boomsday Project. Token Shaman is probably the most adventurous of the positive winrate decks, with it having shifted out of the meta with the Year of the Raven.

There are plenty of decks here with sub 40% winrates, that will halt any push to legend in its tracks. The Priest and Druid in particular really fall flat, with Mech Warrior and Demonlock also performing very poorly.

So with the above in mind, how feasible is a push to legend with Whizbang the Wonderful? The following plots shows the number of games by result and rank (0 = Legend), as well as the average winrates. Note that average winrates appear to have high variation between ranks due to the variable sample size.

Much like a number of meme decks before it, players are playing with Whizbang primarily at ranked floors. The only rank where winrates are above 50% is precisely rank 25, with a general downward trend as you rise through the ranks. Just 9 games in 2 days were recorded at rank 1, suggesting it's unlikely that anybody has completed the Whizbang challenge just yet.

Ultimately your likelihood of reaching legend with Whizbang is going to come down to how lucky you get when rolling the dice on which deck your provided. Nevertheless, Whizbang is still a great way to sample what the game has to offer, and a fantastic addition to any collection.

With any expansion release, Hearthstone's meta undergoes stages of refinement, counter-strategy and optimization. We can evaluate the differences in the meta across regions to see where they may differ. 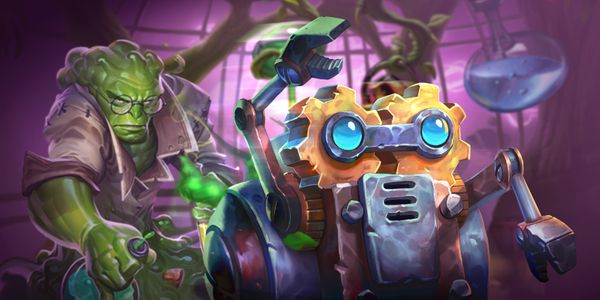 With Day 6 in the books, we're still seeing a lot of diversity and some change, but there are some signs of the first Boomsday meta beginning to manifest with