A little over a week ago the community reached out and asked us to look at the power level of a controversial card, Spreading Plague. To quote from the title:

Hi HSReplay.net! Can you use your data to show how much damage does Spreading Plague soak on average, and compare it with other great anti-aggro cards like Sludge Belcher or Spikeridged Steed? That would be a really interesting point to start a discussion about the potential nerf.

You guys asked so we tried our damnedest to deliver! Many of the views expressed in the original reddit thread can be summarized by the following comment:

If you’re going to do this, people here correctly pointed out that it’s not only about damage soaked but also damage dealt and minions killed.

In order to provide as objective a view as possible as to where the power-level of cards such as Spikeridged Steed and Spreading Plague sit in the context of the rest of the card pool, the following analysis looks at the combined impact cards have in terms of the damage they dish out and the damage they receive.

To establish whether Spreading Plague is indeed outside the bounds of whats reasonable, we first need to establish what’s ‘normal’. The data set analyzed is all Ranked Standard replays between Rank 1 and Rank 4 from August 20th 2017 through August 30th 2017, which is a total of 1,592,764 unique games. Figure 1 shows the average damage done vs. damage received of every collectible minion in the standard sets. Looking at the plot, the vast majority of minions don’t stray far from a fairly compact region within the space. We have fitted a contour to the data which represents the ‘normal’ bound of offensive and defensive output. This contour provides a baseline for us to compare Spreading Plague and Spikeridged Steed too. 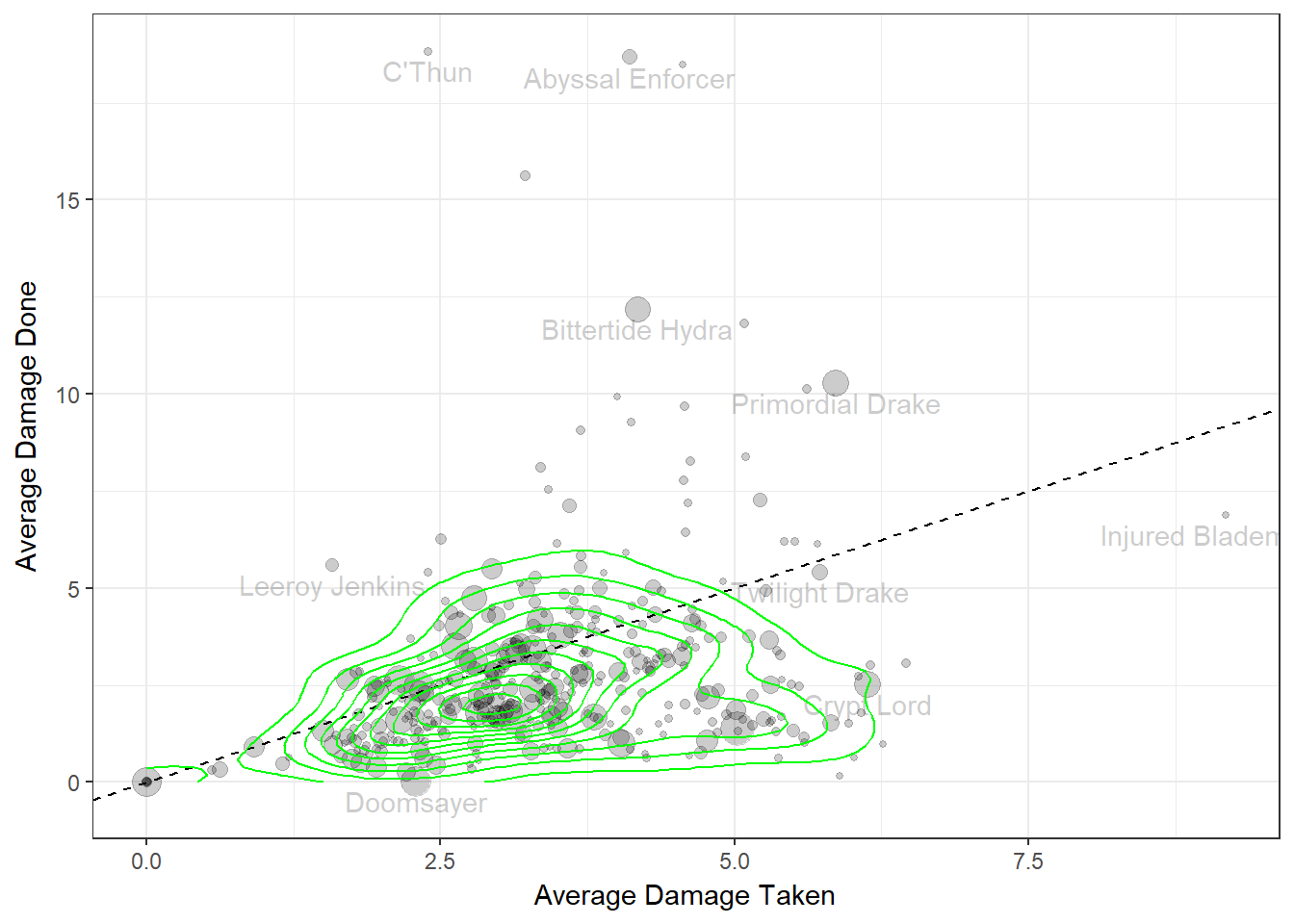 Figure 1: Average damage done vs. damage received for minions. Density contours indicate the typical bounds of these parameters (90% of minions fall within the outer contour).

Before we proceed, its important to note there’s a few caveats to this baseline.

Note that because we are subtracting the average attack and health of the target minions at the end, this introduces some amount of imprecision in our numbers. Next comes the focus of the article, Spreading Plague. Here, we:

Note that because we are looking at the actual damage done and received by the scarabs our numbers include the impact of any buffs played on them from cards like Strongshell Scavenger, Power of the Wild, and Mark of the Lotus. The following shows the contours from Figure 1 overlaid onto just the taunt minions. We have also included our derived equivalent values for Spreading Plague and Spikeridged Steed. 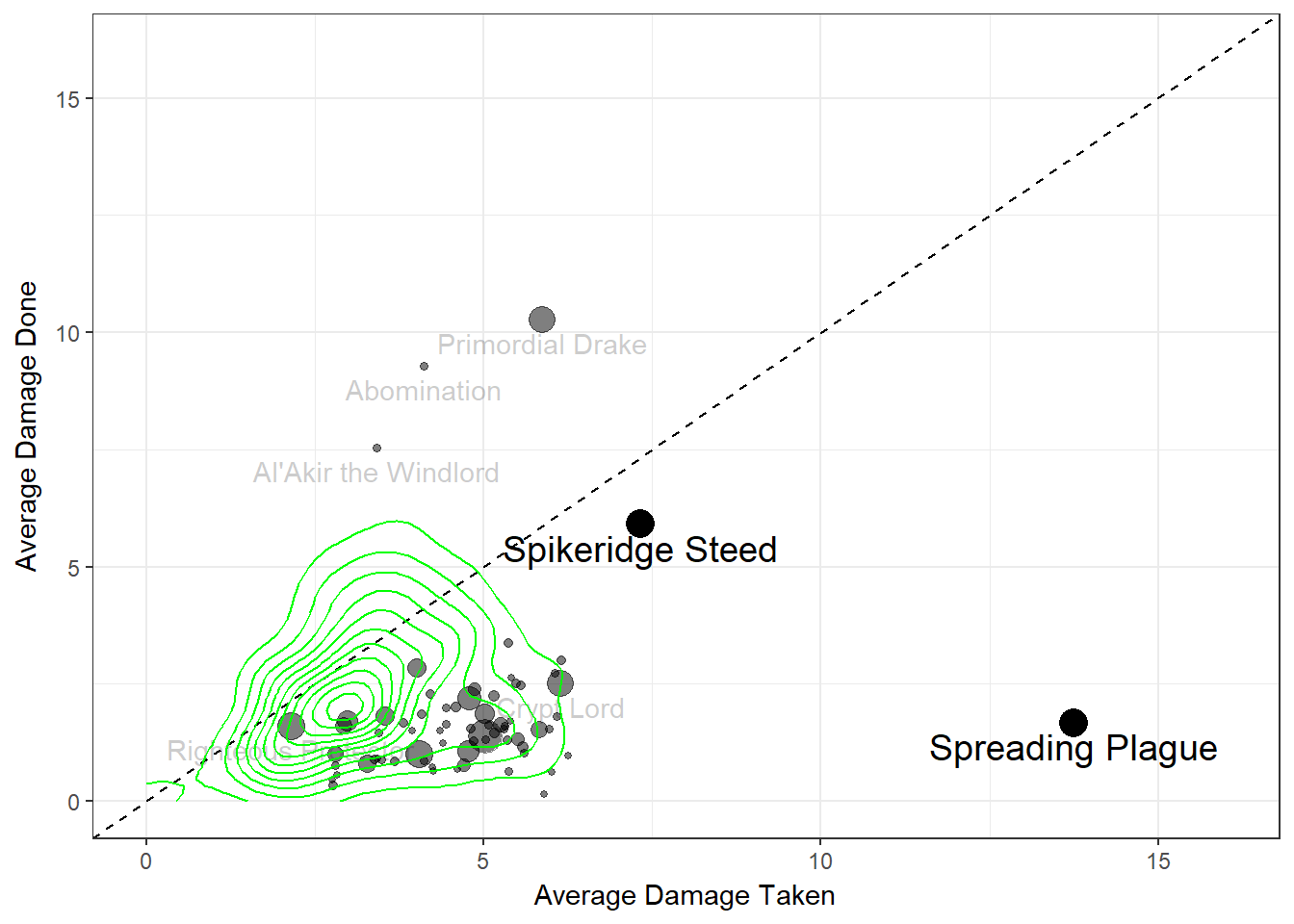 Firstly, Spikeridged Steed sits just outside the range of what's considered normal damage output and defense. The card is considered a staple in any Control Paladin deck, it's a class card, and it's a spell (which may mean it has a different power level baseline vs minions), so it's perhaps not surprising that it sits at a high power level. Given the cost of the card, it's likely that the buff would be applied to a minion already on the board and ready to attack whenever one is available, giving it a slight advantage over the other vanilla minions in the plot. Nonetheless the call as to whether this implies the card is overpowered is fairly subjective. It's interesting to note that comparisons can be made to Twilight Drake, which also sits in a similar spot, and is visible above in Figure 1.

On the other hand, Spreading Plague sits much further outside of the normal range. It's in a league of its own when it comes to absorbing damage. Interestingly, the damage output is fairly reasonable in comparison, or at least it sits within a ‘normal’ range. On average, it doesn’t fair much better than the Paladin 1-drop, Righteous Protector. This data suggests that any potential balance issue with the card lies more in its ability to absorb damage than dish it out. Given how good it is at defense, you could argue the card would see play even if it had zero capacity to deal damage. It's also important to note that this analysis only examines the instances of the card being played. The fact that the card's condition could cause it to get stuck in hand is also not being taken into consideration.

Thanks for the feedback regarding Druid. We've been considering options and should have more to share this week.

Many have expressed the opinion that the card needs to be nerfed, and with Ben Brode's announcement of an announcement on the state of Druid, we wouldn't be too surprised if that's what happened. Either way, the above analysis certainly provides an argument that the current power level of the card is worth examining closely. The data suggest that for Spreading Plague to be more in line with the rest of the card pool, the scarabs it generates would need to be closer to 1/2’s (60% lower base stats). We're looking forward to finding out what actually happens. Finally, we love getting feedback from the community as to what cards they'd like to see analyzed. So if we see more requests like this in the future, then we'll do our best to follow up with similar content.

Since the launch of HSReplay.net Statistics, by far the most frequent support request we had was: "Will you support PayPal?". Today, we're finally ready to announce that it's here. We currently use Stripe for all credit card payments; a well-known payment

There's something special about those first few days of a new expansion. With new sets come new possibilities, everyone is trying new stuff and your opponents deck could contain anything!