Dungeon Runs are clearly popular, but in this article, we're going to take a look at how the Standard meta has been shaped these first two weeks.
All statistics used in this article are based on various data snapshots on HSReplay.net and include statistics available to HearthSim Premium members.

Priest has certainly lived up to pre-release expectations, after plenty of noise surrounded the class following the reveals of cards such as Duskbreaker and Psychic Scream. The class has quickly soared to become the most popular in the game across all of ladder. At higher ranks, Anduin is even more rampant, making up over 25% of ladder between ranks 5-legend and over 30% at legend. Wow…
With a trifecta of popular and powerful ladder options, and the added support from a number of other strong, albeit fringe archetypes, Priest has become one of the more powerful classes in the meta.

Dragon Priest has already picked up a lot of popularity, especially at lower ranks. The archetype also exhibits a significant increase in performance recently, attributable to the rise of Satellite's Big Spell Dragon Priest. This build uses a Spell package built around Spiteful Summoner, enabling a far more proactive mid-to-late game, filled with huge tempo-swings. It has shown the ability to go toe-to-toe with a variety of decks and has a rather well-balanced matchup spread, excluding a noteworthy weakness against faster Paladin decks.

At the higher ranks, Highlander Priest has become the deck-of-choice, coinciding with an increase in performance. Its numbers more than triple as you move from rank 10 to Legend. The deck is still very similar to its Frozen Throne iterations, with only Psychic Scream becoming a staple in the deck. That one card has single-handedly flipped the Big Priest matchup into something favourable for the Highlander.

Big Priest has also been a strong performer as the expansion was released, showing an incredibly high win rate very early on, thanks to cards such as Psychic Scream and Lesser Diamond Spellstone. Although it still is a very strong choice for ladder, its win rate has been dipping each day.

Demon Warlock has seen a huge increase in numbers, surpassing Secret Mage's figures across ladder in the last 3 days. This has been driven by Dog's success with DUE_nest's build, which he used to hit rank 1 Legend. ‘Cubelock' is highly flexible, demanding that the player continuously make re-assessments towards how they need to be closing out the game. Dozens of potential combinations present from the synergies between Carnivorous Cube, Possessed Lackey, Spiritsinger Umbra, and a half dozen other cards which often lead to a handful of Doomguard's being summoned. Matchups against aggressive decks are overall excellent, whilst weakness against Priest remain present.

In turning to Zoo Warlock, we allow ourselves the first opportunity to discuss Corridor Creeper. If you've played any amount of Hearthstone since the expansion was released you're likely already very familiar with this minion, given he has become the most played card in all of Standard by a wide margin. 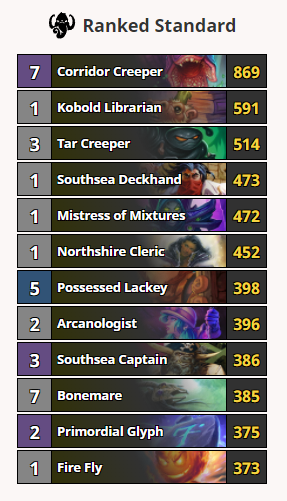 In set reviews he was a sleeper, when minions die he gets cheaper and in mulligan this card is a keeper. In a variety of aggressive decks, Corridor Creeper's mulligan win rate is impressively high. A huge number of aggressive mirror matchups are being decided by which player is best able to take advantage of the tempo swing that it generates. Zoo Warlock has been among several such decks which have quickly slotted in Corridor Creeper alongside Patches the Pirate, with immediate success.

Conversely, there is another card which may have been taken out too quickly. Prince Zoolock decks have been stronger than those that instead opted for Vulgar Homunculus and other 2-cost cards, despite having a miniscule playrate comparatively. Prince decks are inherently stronger in slower games, as Prince Keleseth is allowed to extract further value as the game drags. In contrast, Vulgar Homunculus is one of the premier early-game minion in all of Hearthstone in aggressive matchups. If the meta fails to speed up further, expect Prince Zoolock decks to show strong performance.

Hunter has been one of the early winners of the new expansion, having had numerous viable archetypes since the expansions release. Rexxar has been especially popular at lower ranks, with Spell and Midrange Hunter seeing the most play. At higher ranks these two decks are slightly outperformed by both Recruit and Secret Hunter. That said, there is one true star amongst the class right now - Aggro Hunter joins the many decks making use of Corridor Creeper and Patches the Pirate, the deck has been one of the top performers on ladder since the expansion release. Like most Hunter archetypes, it has shown declining success as over time, as well as reduced power at higher ranks. However, even at Legend over the past several days it has still maintained a strong, positive win rate. Whether the archetype continues to decline or begins to plateau remains to be seen, but for now it is a very strong option for ladder as a whole.

Other classes to look out for

Paladin has been dominant in the early stages of this meta, as Call to Arms has made bid for the most powerful card in the set. Faster, board-oriented Paladin decks have emerged, most notably Aggro and Murloc Paladin. Whilst both decks have highly similar game plans and shells, these slight differences alter some matchups significantly. Aggro Paladin has a faster clock, whereas Murloc Paladin has greater potential to snowball a board-state and go ‘tall' rather than ‘wider'. Notable, there is another aggressive Paladin deck which has demonstrated a high win rate - Silver Hand Paladin. If the archetype had exhibited sufficient frequency, it would have been placed in tier 2. Slower decks within the class have not been strong so far.

Mage has offered a warm welcome towards Aluneth and Explosive Runes, each fiting into the new Secret Mage. Explosive Runes has opened the door for Kabal Lackey, a minion which previously had fallen out of favour. Previously, it paired poorly with Mirror Entity, often being activated in early turns by Fire Fly. However, Explosive Runes is a much stronger tool in the early turns alongside Kabal Lackey, due to the conversion of any missed “value" into crucial burn. Secret Mage has been the most popular deck on ladder since the expansions release, having a strong win rate overall and fantastic matchups against a majority of slower decks.

Exodia, Elemental and Control Mage have each failed to make a significant impact on the meta thus far, having both mediocre win rates and frequency. Big Spell Mage however has been somewhat promising, making use of high-cost, high-value spells with the new Dragon's Fury, Arcane Tyrant, and Dragoncaller Alanna to create huge board clears and swing turns.

Rogue is still being largely defined by Tempo Rogue. Tempo Rogue has maintained its very balanced matchup spread, and is one of the stronger decks on ladder. Miracle, Kingsbane, and Mill Rogue have not had positive win rates thus far. Nonetheless, each deck does present polarizing matchups and so may find use in narrow meta environments.

Druid is still doing quite well, with a few new cards added to already existing decks. Aggro Druid makes full use of Corridor Creeper, but is mostly the same with some decks adding in a Dire Mole or even Boisterous Bard. Jade Druid is in a similar position, staying essentially the same deck with a few new cards, such as Lesser Jasper Spellstone for removal and Arcane Tyrant for extra tempo while casting all their high costing spells. These archetypes remain strong as always, but aren't super scary to run into if you're playing most Hunter, Priest or Warlock decks. Greedy Sprite has been useful to ramp even faster in Big Druid, though here again there isn't much change.

Warrior has been in a weird spot. Pirate Warrior has a decent win rate but is a rare sight nowadays, considering that in over 10 million games, 1% were Pirate Warrior.
That's it for good news. The other Warrior archetypes all have an abysmal win rate despite the community's best efforts in making them work.

And finally, we have Shaman. Nowhere to be seen in tier lists, the class has been in a dark place for quite some time, with Token Shaman being the only way people can get a positive win rate… in ranks 20-16. Any other deck at other ranks are all under 45%. Looks like those basic totem synergy cards didn't help the class at all! What a surprise!!

This article was co-written by Corbett and MrSantos. Join our Discord server for feedback!

Trying to plan combos across two different turns can be frustrating, especially when your opponent anticipates what your next move will be and tries to counter it. Time Warp can

Its been a year of Mammoth proportions, with no less than 54 class legendaries being released! Half of these have been built up as the marquee content of each update,