Voyage to the Sunken City's marquee mechanic has proven quite useful to players in all Hearthstone formats. Selecting your next draw may not have seemed game-changing at first glance, but Dredge has proven to be a very useful tool for just about any deck. And though figuring out the top Dredge cards was definitely interesting, we wanted to... dive deeper... into the data to see which cards were chosen most when Dredging.

Many of these cards aren't what you would expect but do make a lot more sense in context of a game. Let's go ahead and check out which cards rise to the top over the course of Hearthstone's latest expansion. Here are the top 5:

Purified Shard is an obvious instant pick, so we're less surprised to see it at the top of the list and more interested in the 2.2% of times that it wasn't picked and what could've led to that... Quest Priest players may still be trying to get the archetype above a 50% winrate, but Dredging that Shard to the top may be a high worth chasing.

Sunken Scavenger and Mankrik's created spell have been easy picks when Dredging so far, but Mankrik's effectiveness has drastically been hit by the latest balance updates. But with its downfall has come Murloc Warlock's rise. Stop dreaming and start buffing your fishy friends.

Guff and Kurtrus appear high on this list as Druid and Demon Hunter have been two of the most popular classes since Voyage to the Sunken City's release. Those classes' hero cards are no surprise to be pulled often.

Most Sunken cards are being rightfully targeted by Dredge cards, but you'll notice a certain Warrior's trident is missing from this top cards list. Even the decks that are running it seem to find better options as it sits 119th on this list with a 58.9% pick rate. By the way, did you even remember that Azsharan Sentinel was a card? Its Sunken Sentinal is finding a good amount of picks at 46th on this list.

Keep track of the cards you've seen or placed at the bottom of your deck with Hearthstone Deck Tracker for PC and HSTracker for Mac! Download these applications today at https://hsreplay.net/downloads

Subscribe to Premium and Tier7 to access the full breadth of stats from HSReplay.net, including advanced filters, mulligan guides, and much more. 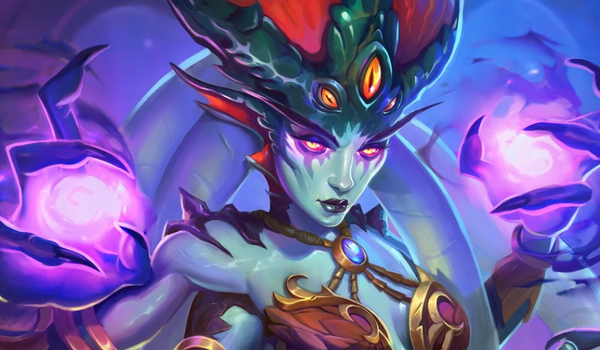 Queen Azshara is one of the most iconic legendary minions from Hearthstone's latest expansion Voyage to the Sunken City. Though these treasures are cool and impactful, it's easy to start