Almost every expansion follows the same path when it comes to the popular decks, and Castle Nathria doesn't seem to be different.

The first step always is the excitement of the new cards, which produces new archetypes and focuses on finding the strongest synergies in terms of raw power. Most of the time, we are seeing quite simple synergies in this step, like Ramp Druid, Imp Warlock, or Miracle Rogue. We knew these decks were coming, and they were easy enough to build to feel like powerful immediately.

In the second phase are the more intricate strategies: decks that are a bit less obvious to build around or with various play patterns. While their ceiling is very promising, these builds are impossible to get right from the get-go and need to be refined over time. Yet, because we can at least adapt to the obvious decks in step one, we have a direction to start with.

Spooky Mage is a prime example of this step, as it became extremely popular during day 1 and 2 of the expansion, pushed by its good match up into Imp Warlock.

Lastly, we will usually see the return of older archetypes and very aggressive builds. Because those already have a large part of their deck figured out from past metas, they tend to punish the new decks, who might still be a work in progress. Through this last phase, the early decks, who were relying on brute strength to execute their game plan, will tend to nuance their strategy, and start incorporating more flexibility in how they operate.

After those 3 periods are complete, we typically get to somewhat of a stable metagame. It will then be much more difficult to affect, and generally needs a Masters Tour kind of event to impact it significantly, outside nerfs or buffs.

While those steps tend to repeat themselves to the point we could almost call them now for the next expansion in December, not everyone is experiencing them at the same speed.

Some of us already are in that third phase of the new metagame, while others are still enjoying (or being annoyed by) the mighty power of Imp Warlock.

In this article, I'd like to talk about this speed nuance, about how not everyone is experiencing Murder at Castle Nathria the same way. Yet, we can all get something from how fast, or slow, the other parts of the metagame are moving.

When a deck is 2% ahead of the next best thing on the ladder, I think the word “destroy” isn't an exaggeration. Indeed, at 300 000 games, 60 000 more than the second ranked Skeleton Mage, Imp Warlock is looking like the juggernaut of the early metagame, both for its results and popularity.

When looking at the data, there are 3 things we need to consider :

Considering the largest part of the Hearthstone population is ranked from Bronze through Gold, I would think this filter is the closest to reality for the majority of players right now.

The big discussion point regarding this filter would be that players from Bronze through Gold aren't as skilled as the rest of the population. Logically, they will perform much better with a more proactive approach in-game to pressure the opponent rather than a longer resource-driven strategy requiring to master more aspects of the game.

And still, if one would be wondering what happens if we log into a premium account and set the filter to the Top 1,000 ranks of Legend?

Imp Warlock is now closer to the other Tier 1 decks in terms of results. The deck is also tied with Spooky Mage at 12,000 games each. Still, the deck ranks number 1 in both the largest (Bronze to Gold) and the most precise (Legend top 1000) sample available on our site.

So what explains this success at various levels of the game for Imp Warlock? Here are a few possibilities:

Theotar, the Mad Duke is the current best Hearthstone Card

Already being compared to the very controversial Illucia, Theotar is the hot topic on social media over the last few days.

Theotar appears to be a great disruption card, helping cancel the opponent's win condition the same way Illucia used to do in the Forged in the Barrens metagame.

If we look at the data, it also seems to indicate that Theotar is a beloved card in the legend rank compared to how people view it in other ranks.

This 20% difference in popularity is a massive tell about how the card is considered depending on which rank you are playing at. It also tells us that as we climb to higher ranks, the concern looks to be what is in their hand more than what is on the board.

But then, if Imp Warlock is the best deck, how can Theotar be the best card? It feels way too slow to have any form of impact against Gul'dan's demonic army. The reason for that is because the metagame in the legend ladder is moving much faster than the metagame in lower ranks.

For now, players up to the Diamond ranks probably are still experiencing the first step of the metagame, where brute force and imposing the power of your decks is the go-to strategy to collect stars. As such, Imp Warlock or Ramp Druid are looking like the best options. They provide a simple direction to follow and don't need to adapt much to the opponent on the other side of the table.

In the legend ranks, though, this step has been much shorter, almost done by day 1. As it was clear Imp Warlock would be a dominant force, the experienced player base started their exploration of Castle Nathria looking for a counter, rather than how to abuse it.

Spooky Mage has now been able to control the board and deny Imp Warlock its needed development.

As Mage was a much slower deck, it pushed more combo-oriented strategies to be popular. For example, the deck was helping Druid be more playable, as the amount of Imp Warlocks reduced.

And with those combo strategies, Theotar became a key card to run to have a way to disrupt their hand, explaining how it is the current social media sensation.

As the more experienced players are now entering the last phase of the unstable part of the metagame, we have started seeing older archetypes return to competition.

Face Hunter is the usual suspect when people stop caring about early aggression and focus on synergies too much. But also Quest Hunter or Naga Priest have been posting good results amongst decks from the previous metagame.

Other former archetypes could be on the way, as Big Spell Mage or Boar Priest have been spotted as well.

On the other hand, ranks outside the legend ranks are dominated by Gul'dan, even though Skeleton Mage is slowly gaining some popularity. As time passes, I would expect Imp Warlock to see its 58% winrate from the lower rank get closer to the 55% it has in the legend metagame.

Only Malfurion seems immune to this difference from the various metagames in the current Hearthstone. Although the class doesn't enjoy Imp Warlock nor the Theotar trend too much, Druid seems to be posting similar results at all ranks of the ladder, while being a good deck to go after as well. For now, the Celestial Alignment deck is doing slightly better compared to the Ramp build.

I've always found it fascinating to compare the raw data a big website can collect to the micro information we can gather from each player sharing their discoveries. It always leads to interesting takes and helps plan on what the future might hold at the different stages of the game.

In another piece coming in the next few days, we'll explore the winners and losers of the expansion. Which archetypes have managed to stay relevant with the new cards, either gaining new tools or matchups they can abuse? And on the contrary, which decks have disappeared so far in the Nathria metagame, for a lack of power or decks they can fare well against?

If you'd like to discuss this piece or have any questions, you can find me on Twitter. 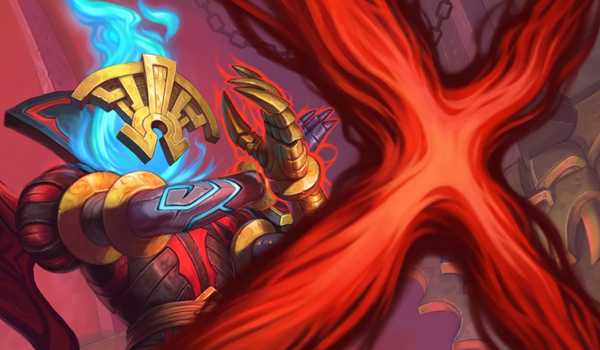 Now that we've gotten a good amount of data, we can see the clear trends of Castle Nathria's meta.

The new legendary minions of Murder at Castle Nathria are looking pretty sus. Which will rise to the top of the new meta?