While the latest patch was trying to get four classes back in the rank with the other ones, it ended up being the change of a neutral card that had the biggest impact. Rogue and Demon Hunter even stayed atop the competition with some of their previous key cards nerfed.

Sure, Priest isn't the same class as it was before Patch 25.0.4, but Rogue and Demon Hunter feel barely impacted. As for Druid, the class only had its new legendary Anub'Rekhan changed, but it is still running the same archetype built around the card.

So apart from Priest, the only real loser of the last balance changes, all three other classes touched feel the exact same in their approach to the game.

Why is that, you might ask. Well, my reasoning is that the biggest change in the patch was a neutral card, and it impacted every class so deeply that it made the class-specific changes less impactful than they should have been.

In nerfing Prince Renathal to now grant only a bonus five health instead of ten, Blizzard reduced the amount of damage every class could take. This mix of trying to limit the damage those classes could deal, but at the same time, impacting how resilient the other classes were, resulted in the patch not hitting everything that it should have.

Currently, Miracle Rogue and Quest Spell Demon Hunter are largely ahead because both classes are the best at creating situations where they can have insane damage output.

But we can also see a resurgence in Control Warrior, the all-time best archetype when it comes to being able to sustain a ton of damage.

So damage is definitely still the name of the game, whether it is about dealing it, or taking as much as possible without breaking. And the biggest reason for this is Prince Renathal being changed in patch 25.0.4.

Does an extra 5 health really help?

The big reason the change to Prince Renathal happened was because the card was far too popular and defined too many decks in the metagame. At least, that's what the developer team told us in their notes about the card.

But if we take a closer look at who used the card, apart from Druid, it was mostly the classes without a true identity.

Control Shaman, Control Paladin, Plague or Quest Priest, Beast Hunter, or Spooky Mage mostly, these classes didn't have particularly strong win conditions and relied more on broad concepts to exist. They really were relying on the extra health provided by Prince Renathal to have enough time to get the ball rolling in the match.

Ramp Druid was a bit of an exception, where Prince Renathal really helped the class with survivability, a long-standing struggle for the class.

For Miracle Rogue, Bless Priest or Quest Demon Hunter though, Prince Renathal was more of an annoying opponent rather than a real consideration to include.
In that sense, the 5 health change was only a problem for the weaker classes and Druid, as the top three before the patch never considered using Prince Renathal in the first place.

In addition to that, the top decks are focused on creating a precise situation reliably more than execute a broad concept. Lowering everyone's health to 35 makes the set-up they are built to execute more likely to hit a home-run.

And if we are comparing who lost the most after a couple of weeks under our belt, it definitely feels like the highly synergistic decks got the better end of the bargain.

Miracle Rogue is slower compared to when the deck included Necrolord Draka. Demon Hunter has a little less high rolls now that the relics are gone from the deck. And the need to deal 10 less damage points each and every game is a prize that made the nerfs worth to take.

Most classes really have lost 10 health

The deal that Prince Renathal offered you before was that if you include 10 more cards in your deck, you'll get 10 more health points. The converts to one point for each extra card included.

Now, the deal has gone to half a point per extra inclusion, which made a lot of classes not take the deal at all. Who can fault them, really? Adding Prince Renathal and nine cards arguably worse than the 30 already in your deck isn't worth a mere five extra health.

And on top of that, there is also the psychological bias going in. Once we tried the bonus 10 health, the extra 5 feels even weaker than they really are, because we can't help but notice how much better having more was.

With that in mind, there aren't many classes using Prince Renathal anymore. Blood Death Knight maybe, Control Warrior too, Ramp Druid sometimes, and that is about it for decks representing more than 1% of the current metagame.

So of course, Rogue lost a big source of damage when Necrolord Draka was cut from the deck. Demon Hunter, too, is more reliant on the opponent creating some board to be able to punish with the Sinful Brand compared to when the Relics would help to create insane combos.

But are those changes really that important when every other class in the game lost 10 health?

If we look at the numbers, the answer is a clear "not really."

With its nerf, the card lost a lot of play rate, about 30% overall. But it also took down various archetypes in the process.

Control Shaman has been replaced with Evolve Shaman. Shockspitter Hunter is definitely stronger than Beast Hunter. And Frost Death Knight is clearly ahead of the Blood Death Knight.

The health Renathal brought was key to the flavor of the metagame, as the current domination of Miracle Rogue and Quest Spell Hunter shows. So, I guess the community is back to waiting for nerfs once again, and hopefully these are spicy enough to shake up Hearthstone.

Until this promising tweet becomes real, I hope you all have a good time on Hearthstone. Good Game, Everyone!

Balance changes are coming! But what do we expect to see? Here are some predictions and thoughts on what's most likely to be coming down the pipes. 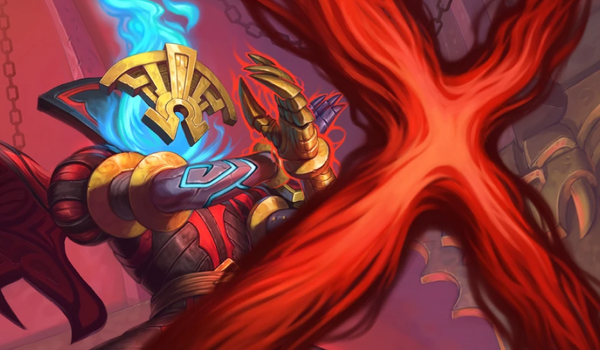 The latest round of balance changes have left Rogue and Demon Hunter dominating the ladder. What can be done to counter these forces?