Death Knight Hero cards are a new type of card that was introduced with the release of the Knights of the Frozen Throne. Each of the nine Heroes received a new Hero card that, once played, transforms the current Hero into a Death Knight, replaces the Hero Power, offers a powerful Battlecry effect and provides 5 armor. Most of these Heroes are incredibly popular at the moment, but lets take a look at how they actually perform. The data used here comes from the 3 day period of August 14th to August 16th. 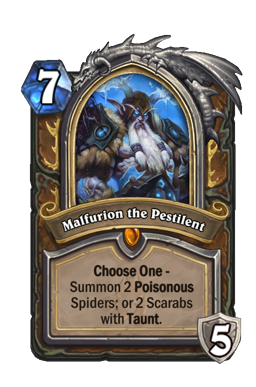 Jade Druid performance is at an all time high since the release of the expansion. Next to Ultimate Infestation and Spreading Plague, Malfurion the Pestilent is definitely one of the major contributors to its success. The currently best performing deck is sitting at a close to 60% winrate. If you can't stand Jade, one of the Non-Jade decks might be right for you! 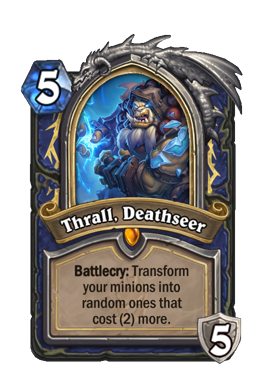 Hero Power (Transmute Spirit): Transform a friendly minion into a random one that costs (1) more.

This card finally allows {% card(name="Kobold Geomancer")%} to directly evolve into Evolved Kobold, letting it to live up to its name! {% card(id="ICC_481")%} is the cheapest of the Death Knights at (5) mana and suffers slightly from this slower meta: the winrate peaks for all 3 game modes between turn 5 and turn 7 at 60-65%. Out of all the Death Knight decks the currently best and most popular one sits at 58% winrate. 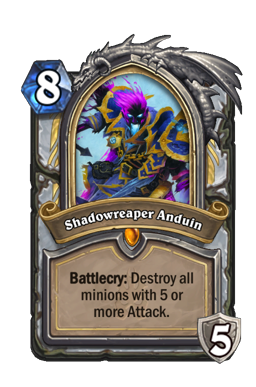 Hero Power (Voidform): Deal 2 damage. After you play a card refresh this.

Shadow Word: Death for everyone, machine gun Hero Power, fantastic looking art - what's not to like? Almost every Priest deck includes this card and apparently rightfully so. Often combined with Radiant Elemental, Shadow Visions and other cheap spells this Hero Power can deal some serious damage. Resulting in one of the biggest winrate increases when played across all Death Knights. Check out one of the currently best performing variations here.

Uther of the Ebon Blade (Paladin): 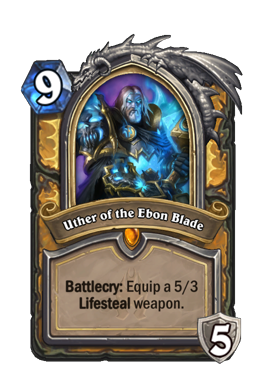 Hero Power (The Four Horsemen): Summon a 2/2 Horseman. If you have all 4, destroy the enemy hero.

Getting this Hero Power to trigger is not an easy task, but even without that it's essentially a +1/+1 buff to your existing Hero Power (with the drawback of losing some Silverhand Recruit synergies). But not only that, this cards also provides a total of 20 effective health (5 Armor + 15 potential healing), making is a nice fit in Mid Range / Control oriented decks. While it not played in that many decks (a good portion of Paladin decks are still the slightly more aggressive Murloc kind), playing this card seems to swing the game in your favor, across the board. Find the currently best performing Paladin Death Knight deck here. 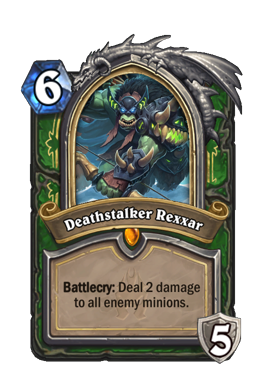 This Hero Power combines the effects and stats of two minions, resulting in some crazy abominations! But even though the majority of Hunter decks include this card, it doesn't seem to contribute to their success. In the currently slower meta dealing only two damage with the Battlecry doesn't quite cut it. In addition to that, at (6) mana it directly competes with one of the strongest cards in the Hunters arsenal, Savannah Highmane. It also appears players may have not quite yet figured out how to utilize this card correctly: While the winrate peaks at turn 8 with 44%, it is played 34% of the time on turn 6 and only 17% of the time on turn 8. Check out one of the currently more successful Hunter decks. 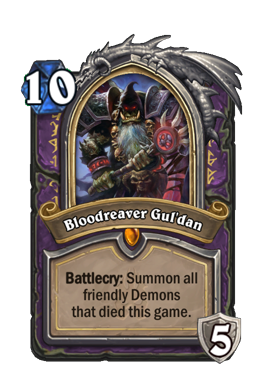 Bloodreaver Gul'dan has no doubt one of the strongest Hero Powers in the game, finally giving Warlock the endgame sustain it needs. Even though the decks including this card might still need some refinement, getting to turn 10 and playing him results in some massive, game winning, resurrections. This card is extremely popular in arena and with good reason: winning a whopping 71% of games when played! You can find one of the currently more successful Handlock variations here. 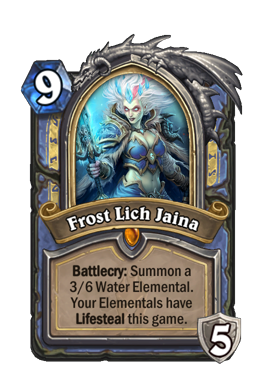 Another highly popular Arena card - summoning a couple of 3/6 Freeze, Lifesteal minions can cause things to get out of hand rather quickly. In constructed decks like this one Frost Lich Jaina makes for a good combination with the Mage legendary from the previous expansion Pyros and can result in some crazy healing (up to 32 with a full board) thanks to Baron Geddon, essentially turning him into a (7) mana Reno Jackson with a two damage aoe. Check out all the Mage decks running this card. 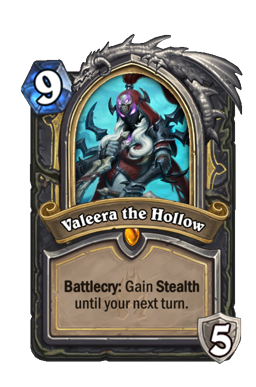 The first passive Hero Power available to players and a very interesting concept to say the least. Valeera the Hollow is almost exclusively played in Miracle Rogue decks at the moment, where it doesn't seem to quite have found its place yet. You can find one of the currently more successful variants here. 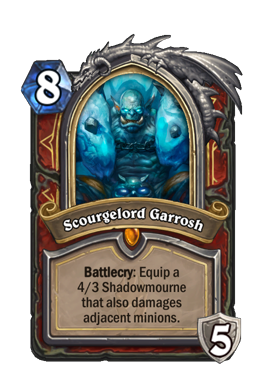 In stark contrast to The Journey to Un'Goro, the Warrior legendary is found at the bottom of the pile this time around - at least in constructed. Scourgelord Garrosh is one of the better Death Knights in Arena thanks to his insane board clear potential, especially considering that Warrior is currently by far the worst class in Arena at an average winrate of 41%. If you want to give Scourgelord Garrosh a spin in constructed nonetheless, check out all the deck running him.

Looking back at our Quest Completion Statistics article released shortly after the launch of Un'Goro: Death Knight Heroes already look like a far more successful concept. Only two of the Quests, namely The Caverns Below and Fire Plume's Heart, were included in even 50% decks at the time. In comparison, only three Death Knight Heroes are not included in the majority of decks and even those still see a significant amount of play.

While none of these are entirely "safe to craft" yet, this should hopefully give you an idea if you don't want to wait. 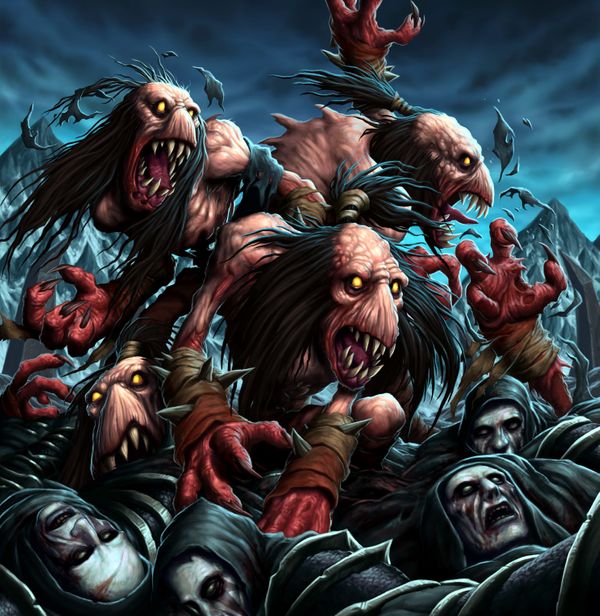 There's something special about those first few days of a new expansion. With new sets come new possibilities, everyone is trying new stuff and your opponents deck could contain anything! 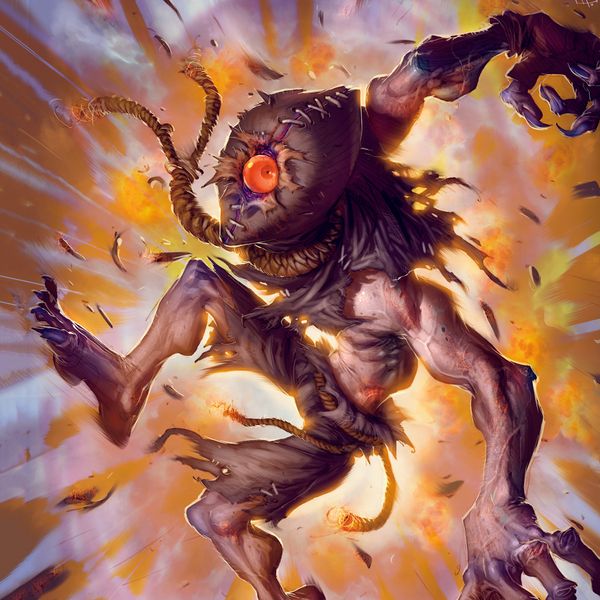 One of the most interesting parts of the Knights Of The Frozen Throne card set is the number of new tech cards like Nerubian Unraveler, Doomed Apprentice, and Mindbreaker that