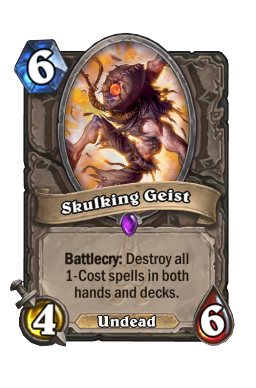 One of the most interesting parts of the Knights Of The Frozen Throne card set is the number of new tech cards like Nerubian Unraveler, Doomed Apprentice, and Mindbreaker that have been included in the set. Today we are going to take a look at the tech card I am most excited about, Skulking Geist.

The card's strength against Druid and Shaman is unsurprising since the card acts as a hard counter to both Evolve and Jade Idol. What is more surprising is how effective it is against Warrior, and how ineffective it is against Priest, where Inner Fire had become a common include in the Un'goro Meta. To understand what's happening, let's take a deeper look at what's actually getting destroyed.

The table below shows the Top 3 cards that are getting destroyed most frequently for each class by Skulking Geist.

We can see that Priest is explained by Inner Fire actually dropping out of the meta to a significant degree. The most commonly destroyed card is the anti-aggro Potion of Madness. I suspect Geist is often run in more control oriented decks, in which case you might be doing your opponent a favor by thinning this dead draw out of their deck. Warrior can likewise be explained once we see that Skulking Geist is removing both a key targeted removal spell in Shield Slam and a key activator in Whirlwind. The loss of either of these cards is likely to be debilitating for a Warrior deck that is running them.

Overall, Skulking Geist seems like a flexible tech card that can be used to effectively target Druids, Shamans, and Warriors. Next time you find yourself struggling against any of these classes on ladder, I hope you'll consider teching in Skulking Geist and then smile gleefully every time it stops your Jade Druid opponent dead in their tracks.

Death Knight Hero cards are a new type of card that was introduced with the release of the Knights of the Frozen Throne. Each of the nine Heroes received a new Hero card that, once played, transforms the current Hero into a Death Knight,

We're excited to announce two new features for personalized statistics for our HearthSim Premium subscribers: My Decks and My Statistics!