This week we had a chance to interview MarkMcKz, a Hearthstone streamer and content creator.

First of all, thank you for taking the time to talk to us, Mark. But before we talk Hearthstone, tell us a little bit about yourself and how you got started creating content for Hearthstone.

Mark: I'm just a guy who started streaming and making Hearthstone YouTube videos while I was in college going to pharmacy school. I specialize in creating silly, fun, and ridiculously challenging combos that aren't even remotely close to being competitively viable. I create decks and videos that I enjoy making, and if other people dig it, then great! And, if they don't, well, at least I had fun making them!

I hope you enjoy reading a little more about me and my Hearthstone experience in this interview!

We know from your streams (and very entertaining videos) that you mostly play Wild. What draws you to that format as opposed to Standard or Battlegrounds?

Mark: I would say before Ashes of Outland I played about 95% Standard and 5% Wild. However, I now play about 95% Wild and 5% Standard. There are several reasons why I made the switch. First, we had the big rotation of card sets to Wild as we moved from the Year of the Dragon to the Year of the Phoenix. Currently, Standard is at its smallest card pool. The Ashes of Outland expansion really didn't provide many combo enabling cards for Standard and outside of maybe Malygos Warlock, combo decks just aren't viable in the format right now.

Another reason why I made the switch to Wild is because of my YouTube comment section. Viewers encouraged me to play Wild and my channel has had tremendous growth because of it over the past few months.

Even though I don't currently make content for Arena or Battlegrounds I enjoy both immensely. There's just something about having control over the deckbuilding process in constructed that I find slightly more appealing.

One of the things you’re famous for are the crazy OTKs you’re able to create. Why did you decide to focus on this, and what’s your favorite one you ever pulled off?

Mark: Nowadays, I play exclusively combo and meme decks, but that wasn't always the case. At one point, I took the game fairly seriously and would focus on hitting Legend. Back around the time when Pirate Warrior first became a serious deck I was using it for a Legend climb, and it wasn't going well. I wasn't just getting frustrated at the game, I was getting mad. That whole experience led me to this "Why am I doing this?" moment. Video games are supposed to be fun. I had lost sight of that. From that point on, I decided to not let having to win all the time consume me. A memer was born.

In terms of my favorite combo, that really is a difficult question. Right now I'm partial to these three:

We do this by generating two Wondrous Wands off Heistbaron Togwaggle. Then, with an empty deck we play a Mogu Cultist and double Shadow of Death it! The following turn we play the other Mogu Cultist summoning Ra! Then, we Togwaggle's Scheme Ra and double Wondrous Wand to draw six 0-mana copies of Ra! An extremely challenging combo considering Rogue's lack of control tools. I was so excited about this combo that I pulled it off on Day 1 of the Saviors of Uldum expansion!

2. Summoning 7 dormant Magtheridon's for the opponent

With an empty deck we play Magtheridon and clear the 1/3 enemy Warders. Then, we play double Augmented Elekk, Shadow of Death the Magtheridon, and King Togwaggle! It's a super stylish way of locking the opponent out of the game! (YouTube link)

3. Turning the opponent into Lord Jaraxxus for the Sac Pact OTK

We do this by playing Expired Merchant (discarding Jaraxxus) and Treachery. Then, once the opponent plays Jaraxxus we play Lorewalker Cho, Voidwalker, Sacrificial Pact, and Unseen Saboteur! This idea came about after the Sac Pact change to only allow it to target friendly Demons. This one is particularly challenging because the opponent has to play along! (YouTube link)

There’s been a lot of discussion lately about the state of Wild, especially in regards to Quest Mage. What’s your stance on the current state of Wild? Any particular changes you’d like to see?

Mark: This is a difficult question for me to answer because I'm not really a high ranked, competitive Wild player. Low rank Wild is a fun, diverse place while high rank Wild ladder has been essentially stagnant for quite some time (with the exception of the addition of Odd Demon Hunter). From my experience, the Wild ladder is fantastic!

Making changes to Wild is a challenging endeavor. While more frequent balance patches would spice things up, there are also people out there who just want to play the same old OP decks from yesteryear. I would tend to lean on the side of wanting more changes and experimentation to the format though.

The biggest change I would like to see is some fundamental change to how resurrecting minions works, especially in Priest. Summoning 8 mana plus minions for a 2 mana spell has never been healthy for the game.

In terms of the Quest Mage issue, I actually see very little Quest Mage at my low ranks. Even so, I can see how it is a problem. I appreciate that Blizzard tried to balance the Quest by increasing the requirement for the Time Warp reward, but that didn't really address the issue. There are simply too many ways to generate cards outside of your starting deck nowadays. Then, you have other problematic cards in that deck like Sorcerer's Apprentice and Archmage Vargoth. I don't really see an elegant nerf for this one. It’s a shame because I enjoyed playing that deck when it first came out. You know, back when it was actually a challenge to complete the quest!

Another topic that frequently comes up when talking about Wild is the lack of support for the format. Is there anything in particular that you’d like to see Blizzard do in the future to better support the Wild community?

Mark: It does sometimes feel like Wild is the red-headed stepchild of Hearthstone. I would love it if Blizzard was more supportive of the competitive Wild scene. There were Wild Open tournaments the past several years, but now it seems it has been discontinued.

Outside of tournaments it would be great if there were special events for content creators to showcase Wild, much like the recent team invitational they hosted for Battlegrounds.

It would also be great if there were in-game events as well. Not too long ago Blizzard brought some Wild cards back to Standard and gave everyone access to them for free. I think they could easily make a rotating set of fun cards that are free to players in Wild for a limited time too!

I don't think this will ever happen, but it would be great if packs and/or crafting Wild cards were discounted in some way. That way newer players would be able to enjoy and experience more of what the format has to offer without being intimidated by the upfront commitment and entry cost.

Let's switch gears for a second now and talk about Hearthstone's next expansion. What are you looking forward to the most with Scholomance Academy as it pertains to Wild?

Mark: There has been a popular combo floating around Reddit and social media that is a real Turn 1 OTK in Druid. You use double Lightning Bloom to play Barnes, which pulls out Kael'thas Sunstrider. Then, you play Ultimate Infestation or Overflow and miracle the opponent for lethal. It’s a 20 card combo or so. I'm looking forward to giving it a couple hundred tries!

Are there any cards already revealed from Scholomance Academy that you think will make a significant impact in Wild, perhaps even shape the meta?

Mark: We're still pretty early in the card reveal season, but I know Flesh Giant will give me nightmares IRL and maybe in game too. Man, I'm really bad at predicting how cards will pan out. I'll leave that up to the card reviewing experts like Trump.

Favorite and least favorite card of all time?

Mark: I have to say Boulderfist Ogre. It has good stats for the cost! Least Favorite: Lately, Convincing Infiltrator!

Mark: My favorite has to be Whisper of the Old Gods. Yogg is love, Yogg is life. As for the least favorite, Mean Streets of Gadgetzan. Jade Idol and Patches? Puke.

A deck you can’t stand?

Anything else you’d like to say before we wrap up the interview?

Mark: Thanks so much for featuring me with an interview! I would be lost without your website, data, and deck tracker!

Thanks again to MarkMcKz for sharing his time and thoughts on Hearthstone with us! You can find his content through the links below. 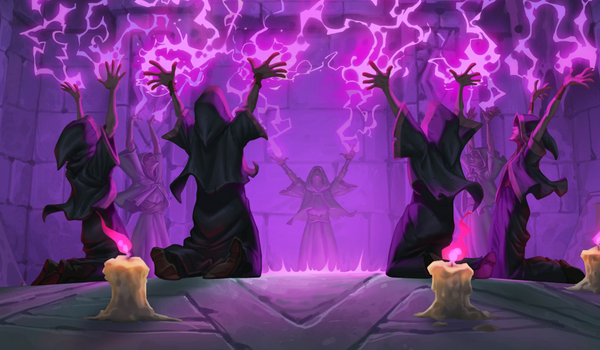 The first neutral weapon in Hearthstone along with several legendaries have been revealed today. 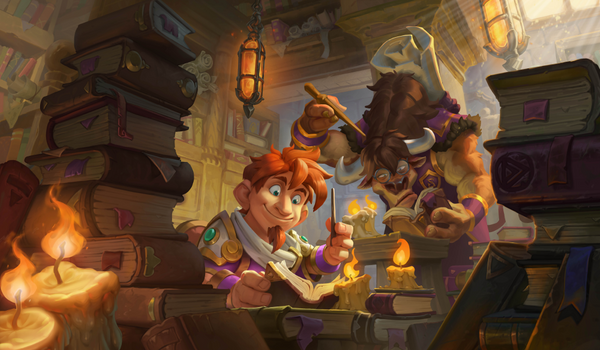